Stephanie Pomboy reports in Barrons that US household net worth has rebounded sharply from the depths of the financial crisis. Since March 2009, US household wealth has increased an astonishing $20+ Trillion and now sits at an all time high. 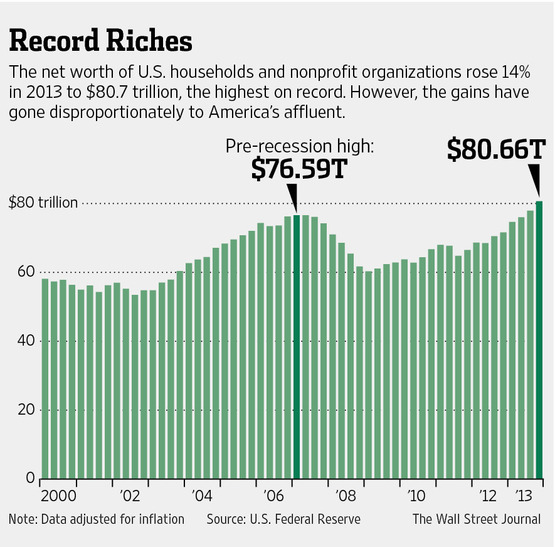 In the less good news, the WSJ, reporting on the same data, agrees with Pomboy that the majority of this wealth increase has gone to the already wealthy while the middle class has seen little of the gain.

Holdings of stocks and bonds as a share of overall net worth, at 35%, is at the highest level since the dot-com bubble burst in 2000, Fed data show. That means that even as wealth increases, it’s increasingly going to the affluent.

In addition to the affluent, much of the wealth surge is going to older Americans. Both groups are less likely to spend their gains and more likely to save, Mr. Emmons said. Meanwhile, sheer demographics—the retirement of the baby boomers and America’s aging population—are increasing the ranks of the nation’s savers.

The upshot: While American households overall are getting wealthier, the benefits for the economy may prove limited until such improvements reach more people

Thus it seems the US economy may be stuck in slow until both the middle classes and younger earners, who spend a far greater percentage of their incomes and wealth, receive a larger share of economic growth.

Tags: income disparity
« Back
Next »
Posted by martinw
Share
Return to main page